In a dark and smoky bar down a small and pokey street in Copenhagen is where my heart lies. It is a bar where the smell of cigarettes and beer lingers ever so faintly; some days more than others. It is a bar full of memories. Of laughter, and wonderful evenings. Of tears, and sadness.

It is the place where my heart soared the very first moment I met the boy with the kind brown eyes and tweed flat cap. Where, more than a year later, he broke it irrevocably. After I bought him a beer, no less. But, it is also the place where my heart has started to heal. A place that has seen both the best of times and the worst for many of us who have walked through the door. Above it all, it is a place to go to feel safe. One that reminds you: you are not alone. 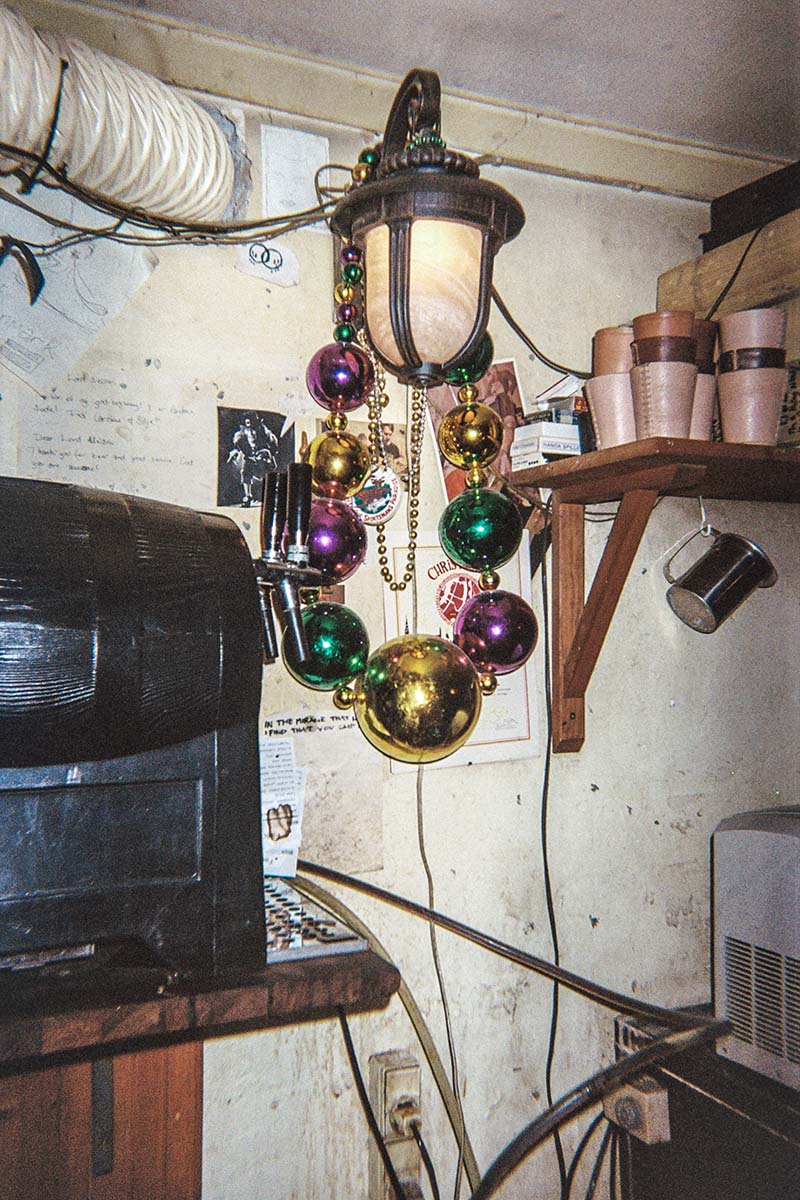 Mardi Gras baubles sent to Lord Nelson Copenhagen by one of the former managers, Dave, who passed away several years ago. The baubles, which Dave had given to a couple of bar regulars who had visited him in New Orleans, were brought to Nelson’s when everyone met to celebrate his life. 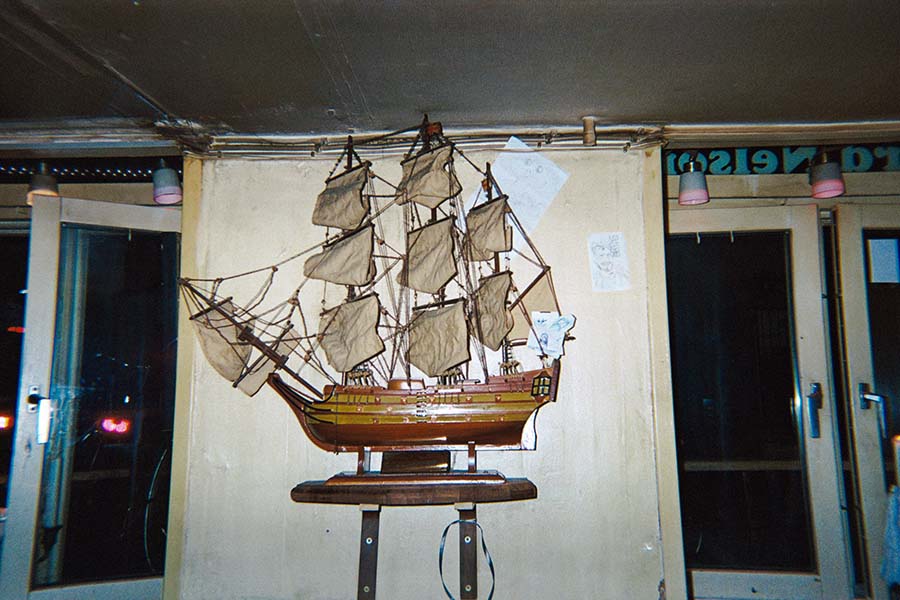 Supposedly based on HMS Victory, Lord Nelson’s flagship at the Battle of Trafalgar, and bought by the bar owner at a trade fair. A fine specimen; despite not having the correct number of guns as the famous ship.

Pubs are not everybody’s cup of tea. But for me, they have been a lifeline. One pub: Lord Nelson. Not two years ago, as a 33-year-old moving to Copenhagen with few friends and no steady work, this 88 square metre dive became a home-away-from-home for a directionless girl with little bartending experience. Not to mention an inability to change a keg without wanting to cry, or, I’ll admit, a huge liking for beer. (No, I don’t know why they hired me either.)

Two years down the line, I can change a keg. Just. And I can finally tell the difference between an IPA and a stout. And though I rarely work at the bar now, it has done more than just shape my time here in Copenhagen, it has given me a sense that I finally belong. It’s a feeling that is hard to describe, but which has readily presented itself in the memories and friendships that have formed over many cosy nights, and many more drinks. 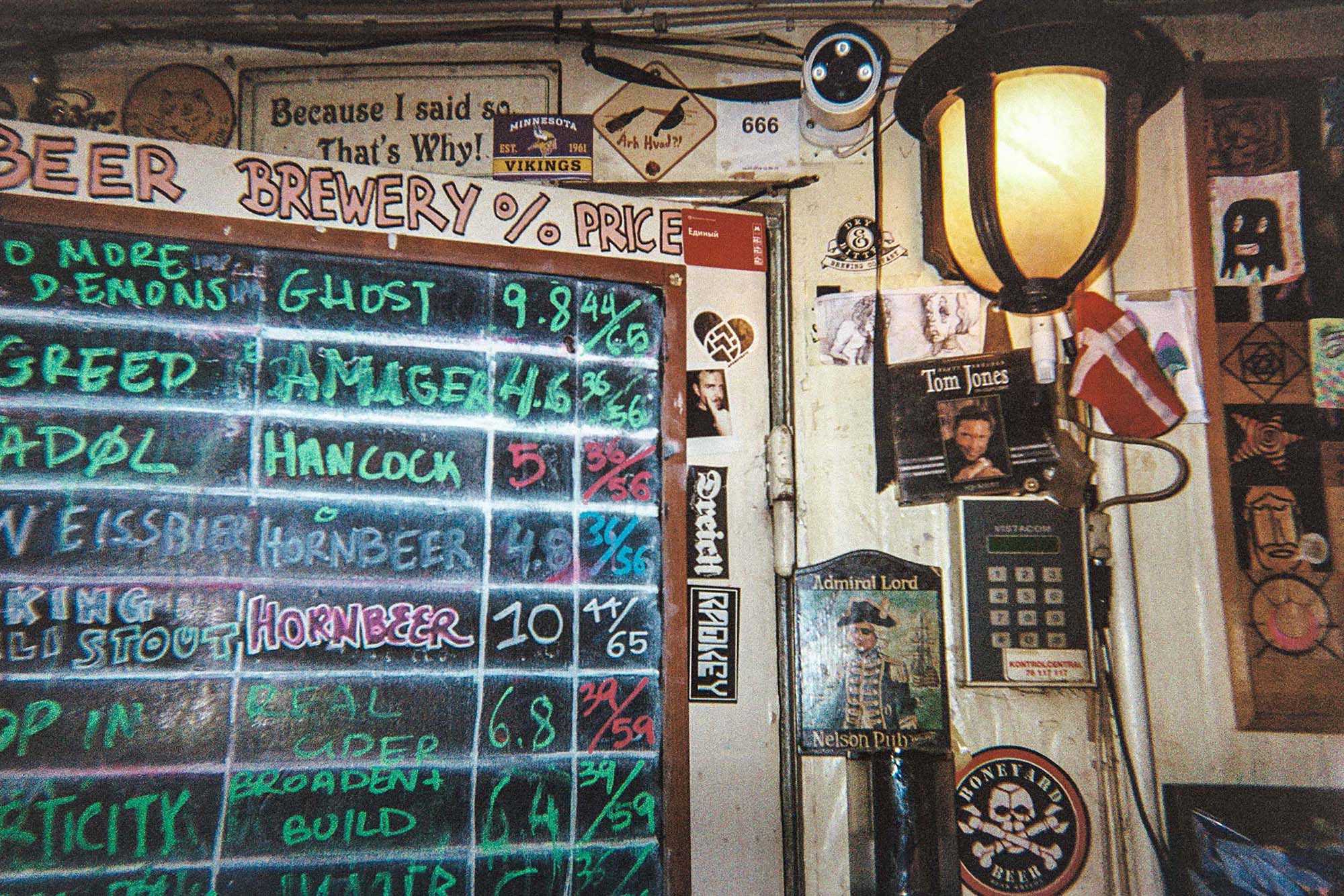 A collection of personal items——provided by bartenders, regulars, and many other people who have passed through the Lord Nelson Copenhagen——that has built up over the years. The Tom Jones CD was brought in for one regular, promptly forgotten, and given a new home behind the bar.

Down the worn steps, through the peeling blue door with the poster of its namesake, are the ​faded yellow walls far past their best; the best moments of the past 14 years deeply ingrained within them. Toilet walls covered in graffiti, a disproportionate amount of which is grammatically correct. The Tom Jones CD stares out from behind the bar, stuck clumsily to the wall with ancient sellotape. Old, dusty paintings——some given by regulars in exchange for beers——of the Battle of Copenhagen (1801) and Lord Nelson, who has been somewhat forgiven by the bar’s Danish clientele for the role he played.

And then, of course, is the beer itself. There’s the homemade apple cider, brewed by the owner, Richard, as well as the rotating selection of IPAs, sours, and stouts that run the gamut of Danish microbreweries: from Beer Here and Amager Bryghus, to Hornbeer or Dry & Bitter. Breweries that artfully toe the line between playfulness and seriousness, constantly pushing the Danish beer scene forward. 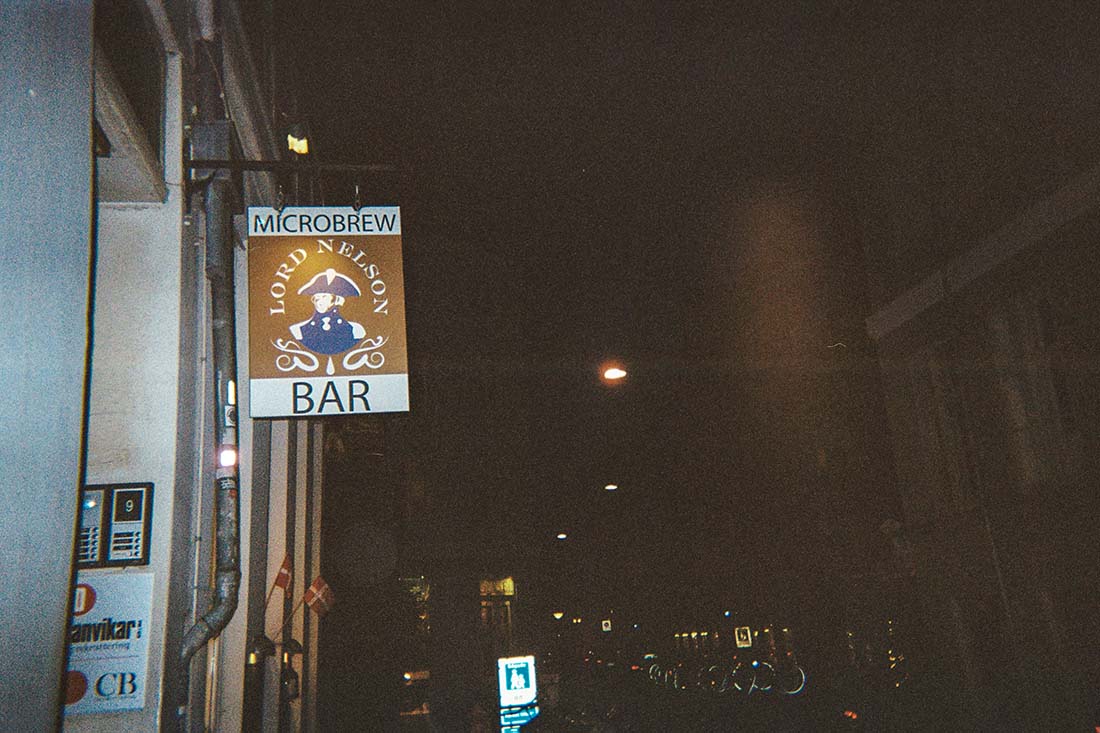 Hyskenstræde, the Copenhagen street where Lord Nelson has made its home, derives its name from the German word Häuschen, meaning “small houses”. This was in reference to the public toilets that used to be located at one end of the street. 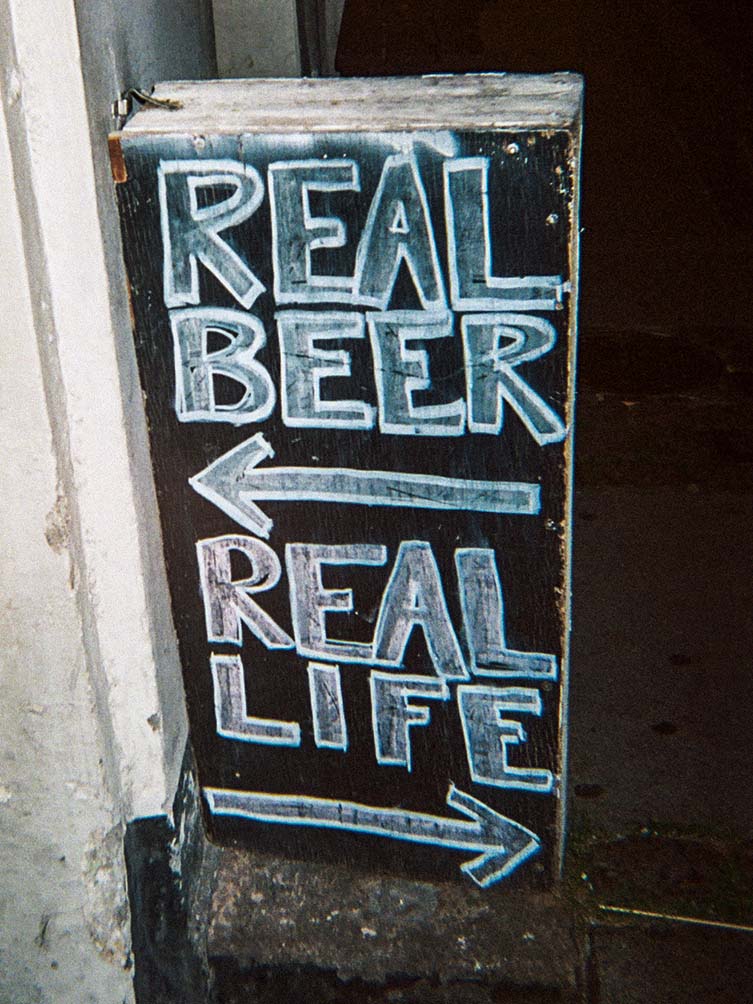 Which one would you choose?

I’ve had local pubs before, and I’ve liked them to some degree. But I never really understood their importance until I discovered how much I needed one. Now that I’ve found mine, I don’t think I’ll ever be able to let it go. Because, here is the thing about finding that perfect local bar: you don’t just make friends, you make family. And if that includes some drama every now and again, or that slightly odd relative everyone tolerates? It’s worth every moment. Having a perfect local bar opens a window onto a city in a way you could never imagine.

It creates a meeting ground to form friendships with people you may not otherwise engage with, and offers a glimpse into a culture that is beginning to fade. It throws you into the same space as Rasmus, the art historian with a penchant for F1 and a crisp, bitter IPA. And Iwan, the big friendly Welshman who loves death metal and folk music in equal measure, and who can, when drunk, keep hold of a giant Welsh flag but not his phone. It also introduces you to Allan, a quiet man with bright blue eyes who tells you, softly, that he is a builder, but who still carries out his main passion——as frontman of the successful Danish ‘90s rock band, ​The Sandmen——on the side.​ 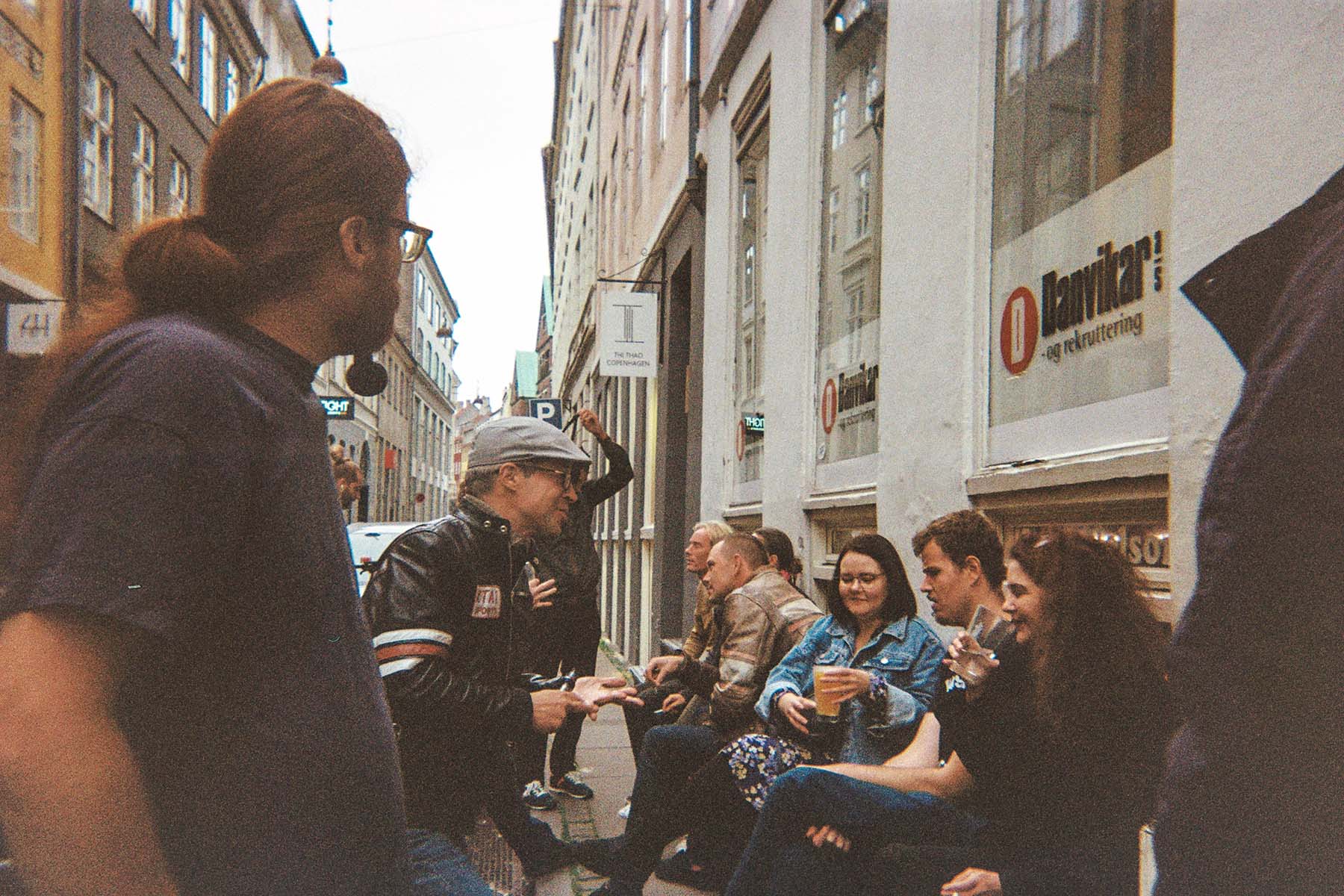 And then there’s Jon, the motorsports-obsessed tunnel engineer; and Jo, the beautiful art dealer with a madly enticing laugh. They, who met beneath the nicotine-stained ceiling and married several years later, holding their reception in the place where it all started. It’s a pub that brings you into contact with regulars from another era, like Joanna, Luna, and Paulina, with their brilliant minds and engaging conversations, and matriarch Rikke, with her long legs and even longer tales of working behind the bar in its infancy. Not to mention Tina, who can knock back a beer without dropping a stitch while she knits.

And who could forget big, booming Niels, the regular who became a brand-new old friend the moment we met, and who eventually charmed his wife, Pia, into enjoying microbrews with flavours of guava, and grapefruit; elderflower, and citrus. The hoppier the better. The regular who, some years later, held a wake for Pia under the dim lights of Lord Nelson, toasting his other half with the people who mattered most to them both. The regular who then left Copenhagen, and whose bellowing laugh beckons us back through the front door when he comes to visit. 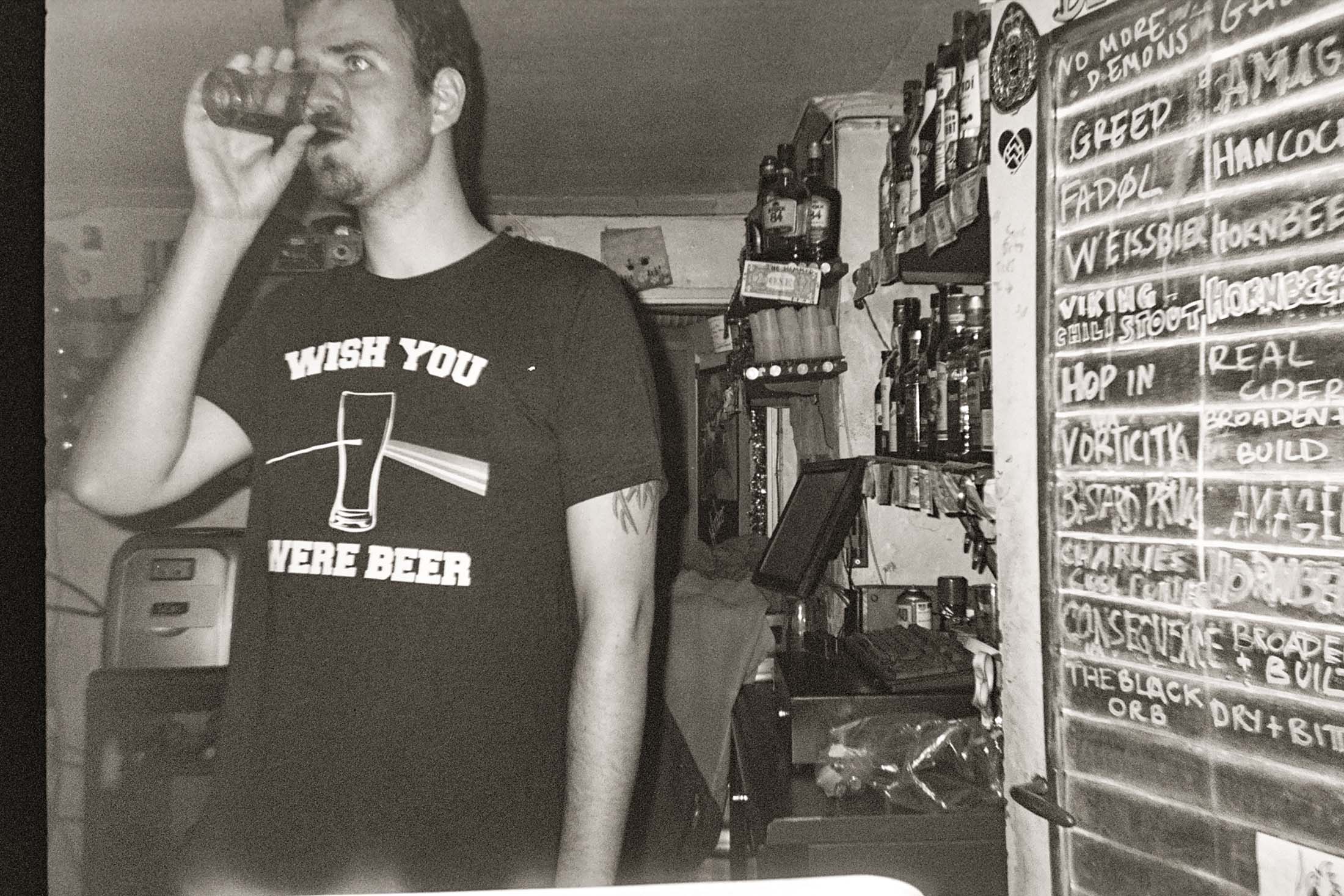 Bar manager Lukas takes a quick break during one of his night shifts.

Indeed, what started as a curious and accidental affair with craft beer a short time ago has since morphed into a wondrous beast; each moving part made up of a million little love affairs. That love has now extended far beyond the people who first supplied it. To every scribble, sketch, and photo that adorns the walls and pump clips. Like the Mardi Gras baubles of bright green, purple and gold draped on a hook near the old sound system, sent to Lord Nelson by beloved bar manager Dave (not Tall Dave, the other one) who died suddenly before his gift arrived, and whose legacy lives on in the decor and the people. 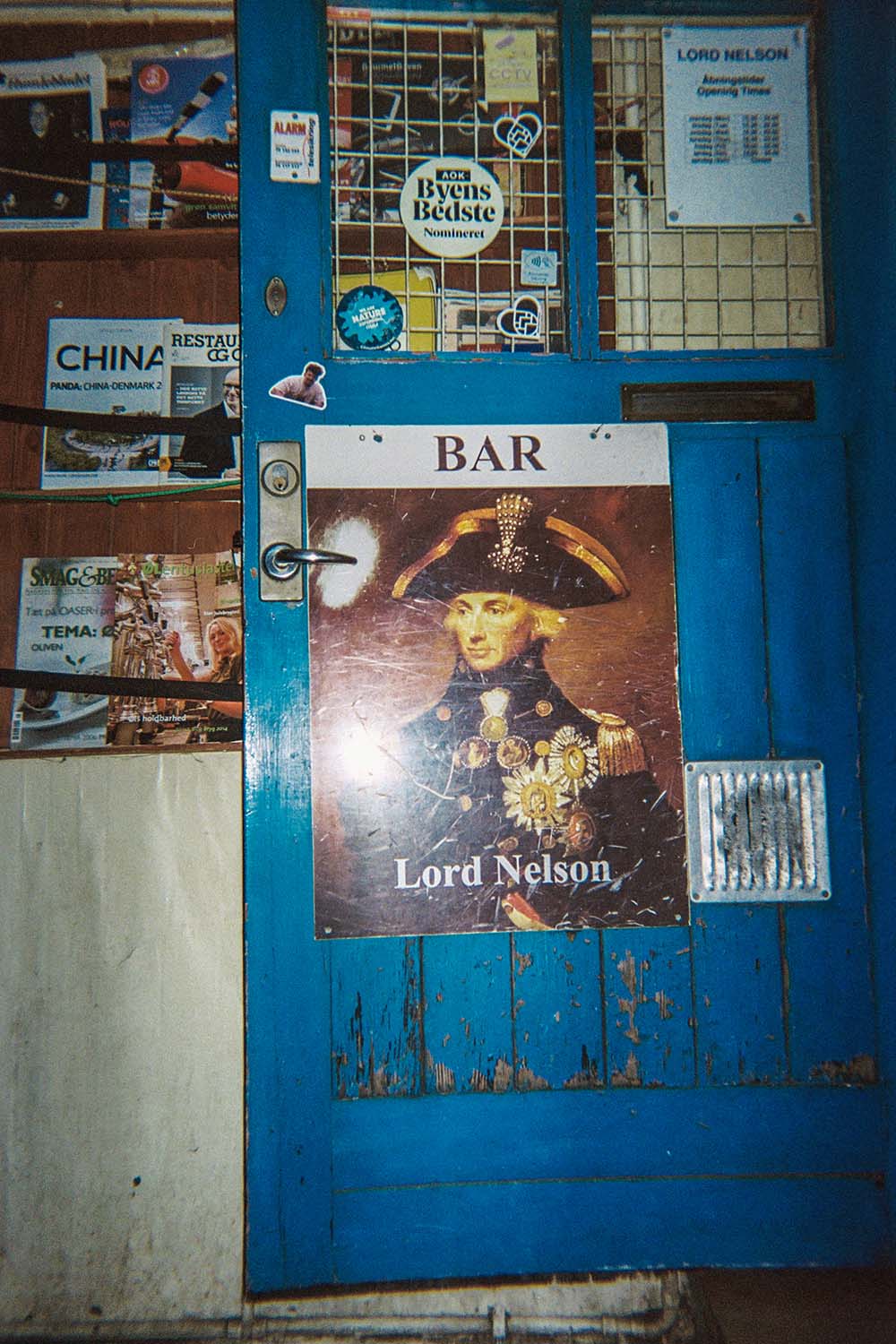 Lord Nelson Copenhagen’s famous blue door, which is always open when you need it to be. Unless it’s cold, or if the bar is shut. 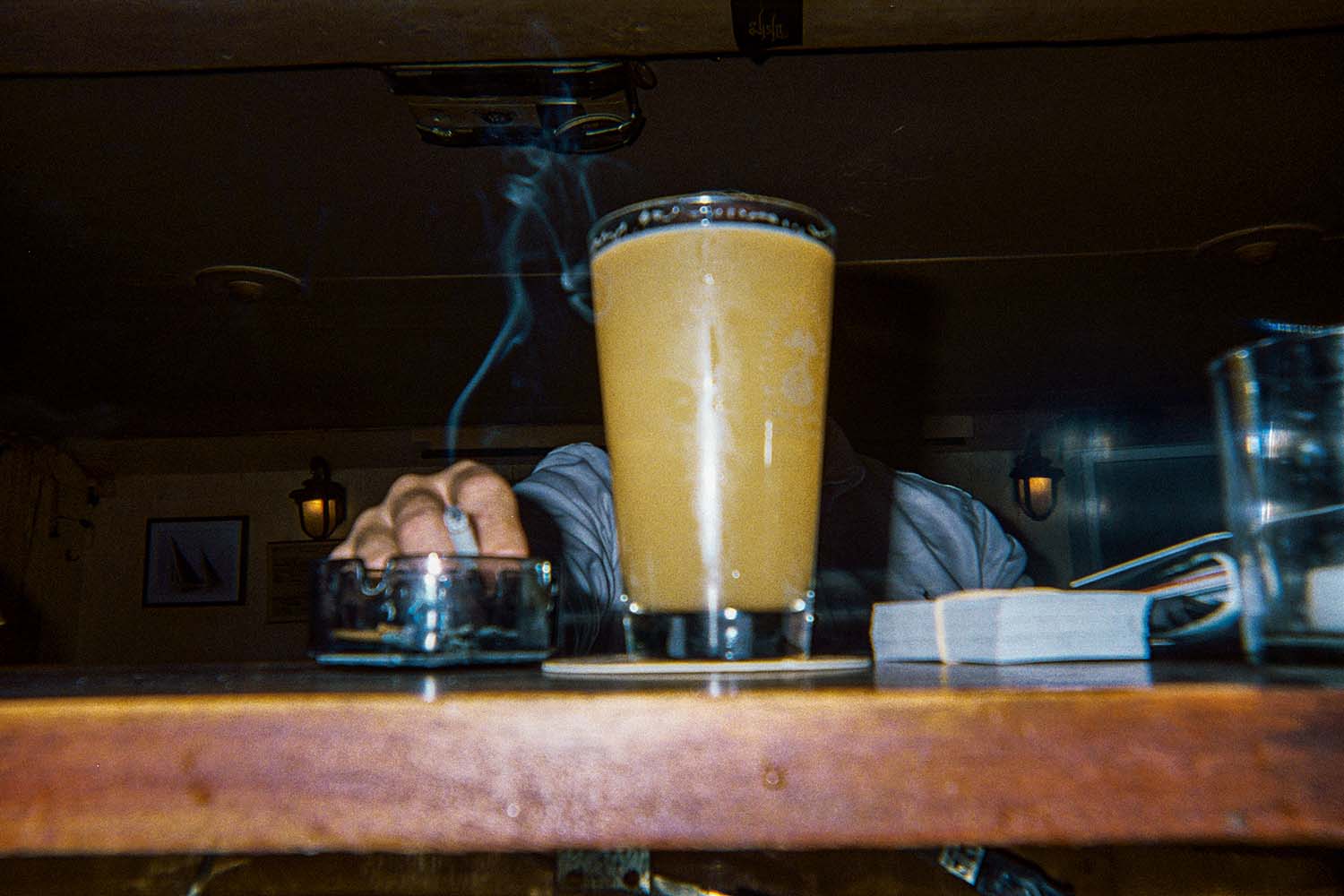 A quiet Monday night calls for beer and a smoke for one Lord Nelson customer.

Because, like the beers that flow through this small bar’s taps, leaving their touch on every surface, so too do the friendships that have emerged from it; streaming out past the shabby front door towards long-gone regulars, bartenders and beyond. Friendships that bridge gender, nationality, and generation. With friends who might not have known us for long, but who accept us as we are, and who forgive us our weaknesses. The type of friends who, at a moment’s notice, mean you never have to go through the heartache alone. 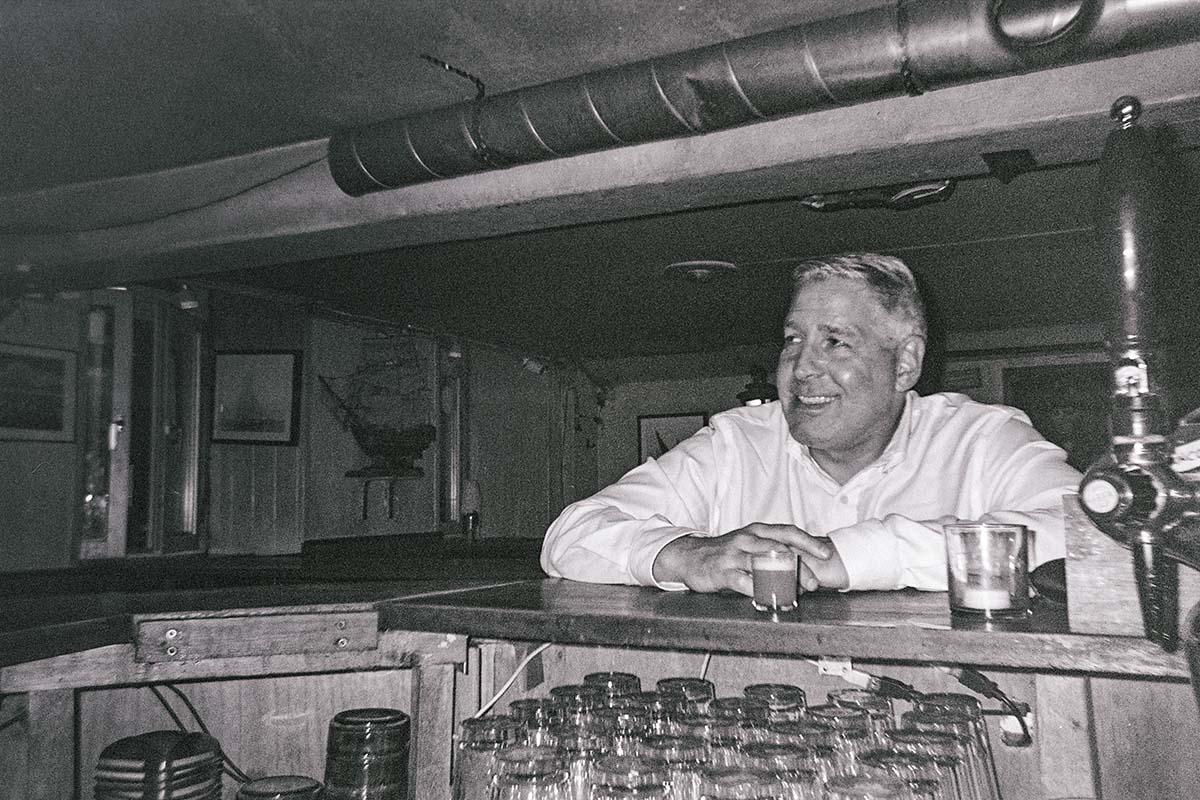 Everyone’s favourite Welshman, Iwan, chats to another regular while he chooses his next drink.

Be it in a hug from Wes, a man who is as gruff as he is kind, or a smile from Gerry, the type that lights up his whole face, and yours. Or Michael, whose never-ending supply of Lego sets have resulted in many a wonderful hour of building and bonding, and Paul, the strapping Minnesotan with his succession of loud Hawaiian shirts and Wu Tang caps. For whoever it is, the spirit of Lord Nelson runs through them as it does so deep in me.

You don’t just make friends, you make family. A family on hand to remind you that everything will be OK. That is the importance of a local pub.